The two-storey boutique hotel of 14 (fourteen) rooms, is located a few kilometres outside the town of Chora Kíthnos in Kíthnos Island. It is accessed by a tall windbreak wall that runs along the southeast façade. This is where the entrance to the main communal area and towards private courtyards of the rooms, is. The massing οf the proposal is developed along the plot, with the outdoor areas in direct dialogue with the swimming pool which is the key element of the composition at the north western boundary of the plot.

The intention of the design was to create the atmosphere that prevails on the beach during sunset, while the morphology of the building draws inspiration from the local Cycladic architecture. The “village” formed by whitewashed double rooms is defused into the longitudinal communal pool, the “paralia”. On this side, the volumes of the rooms has been ‘carved’ smooth by the waterfront and formed a sequence of curves and edges. Between them, the rooms slide, and, in their extension, private balconies are formed, with unobstructed views to the sunset. This arrangement allows for light and view to dominate in all areas whilst guests’ privacy is also maintained.

This intention is expressed both morphologically, with the sliding of volumes as a way of interrupting visual contact, but also by private entrances and through private staircases that create sculptural building elements. The lightweight structures of day-beds, ensure the direct access of each ground floor room to the pool and act as a visual filter. In the communal area there is an outdoor kitchen-bar and a seating area. 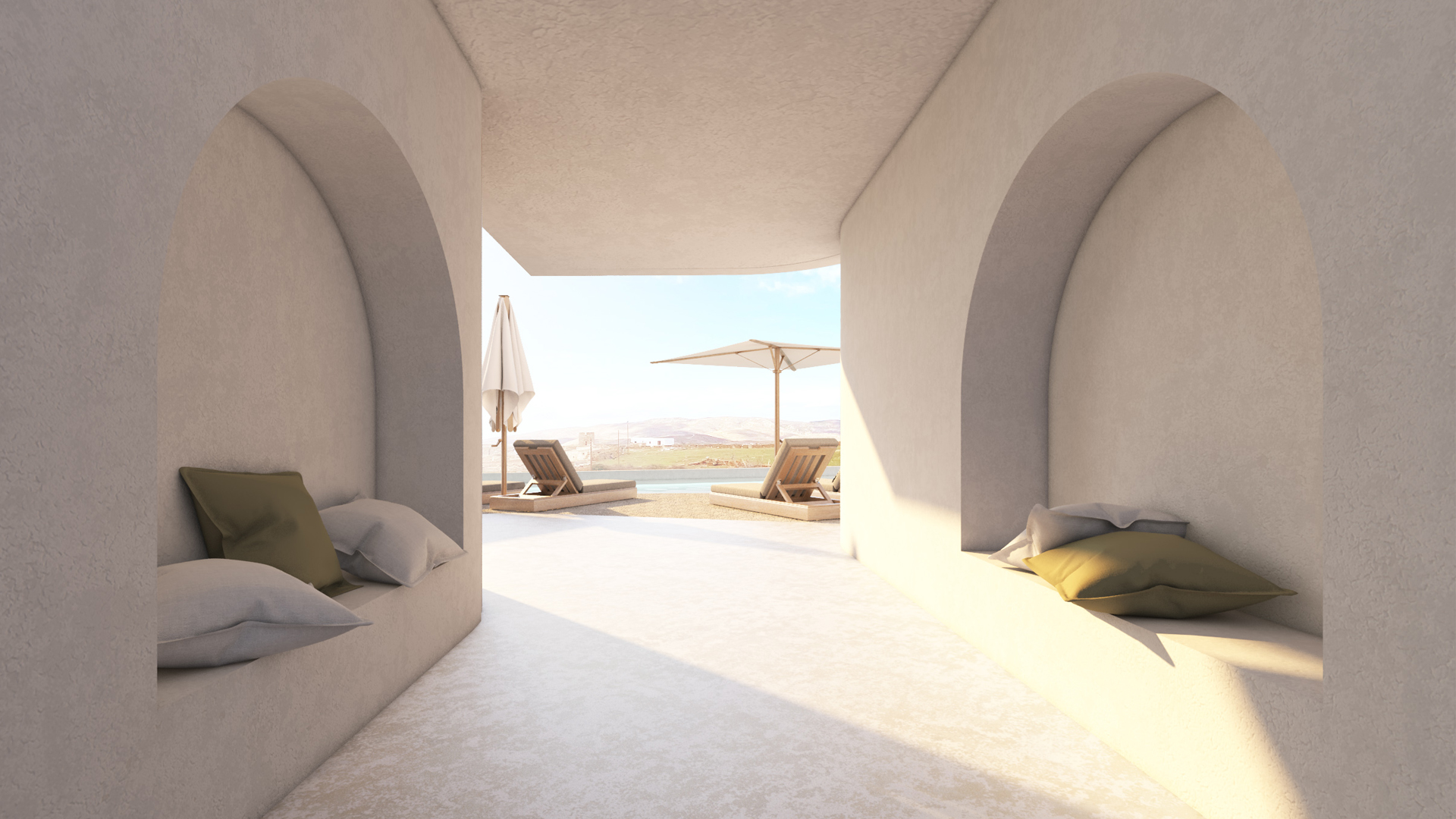 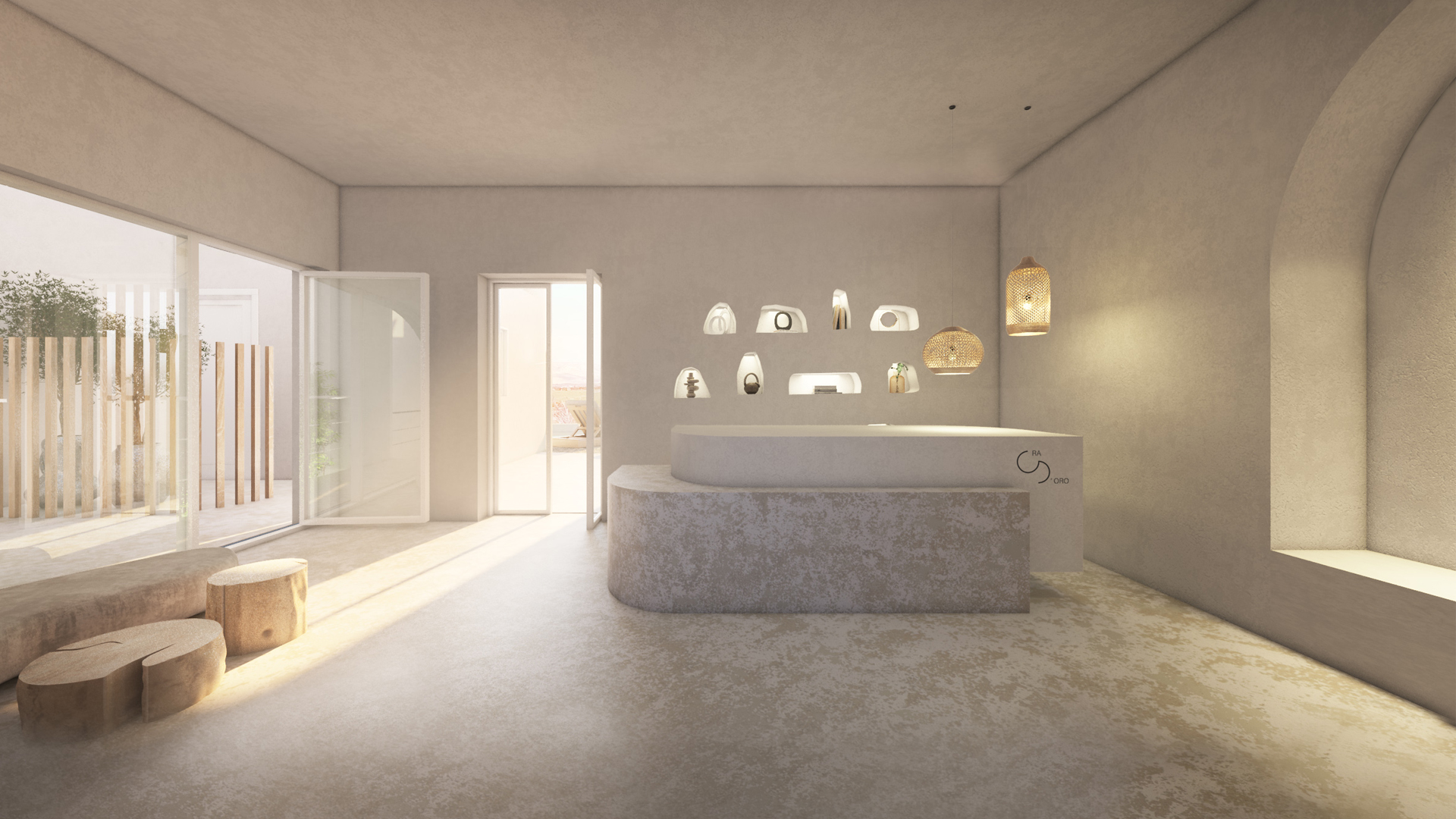 The materials proposed attempt to integrate the project into the architecture of the traditional settlement of Chora. For this reason, the facades are dominated by white plaster and light grey wooden frames. The interior design is also dominated by white plaster on the walls and built-in furniture. Wood is also found here on the beds and in secondary elements, such as movable and fixed panels.

We use cookies on our website to give you the most relevant experience by remembering your preferences and repeat visits. By clicking “Accept All”, you consent to the use of ALL the cookies. However, you may visit "Cookie Settings" to provide a controlled consent.
Cookie SettingsAccept All
Manage consent

This website uses cookies to improve your experience while you navigate through the website. Out of these, the cookies that are categorized as necessary are stored on your browser as they are essential for the working of basic functionalities of the website. We also use third-party cookies that help us analyze and understand how you use this website. These cookies will be stored in your browser only with your consent. You also have the option to opt-out of these cookies. But opting out of some of these cookies may affect your browsing experience.
Necessary Always Enabled
Necessary cookies are absolutely essential for the website to function properly. These cookies ensure basic functionalities and security features of the website, anonymously.
Functional
Functional cookies help to perform certain functionalities like sharing the content of the website on social media platforms, collect feedbacks, and other third-party features.
Performance
Performance cookies are used to understand and analyze the key performance indexes of the website which helps in delivering a better user experience for the visitors.
Analytics
Analytical cookies are used to understand how visitors interact with the website. These cookies help provide information on metrics the number of visitors, bounce rate, traffic source, etc.
Advertisement
Advertisement cookies are used to provide visitors with relevant ads and marketing campaigns. These cookies track visitors across websites and collect information to provide customized ads.
Others
Other uncategorized cookies are those that are being analyzed and have not been classified into a category as yet.
SAVE & ACCEPT